The structure of ritual in Paganism tends to be to create the sacred space as a microcosm representing the whole cosmos, then to raise power within it, then to wield the power, thank the divine powers and/or commune with them, and then to dismantle the whole structure. This format is essentially derived from the Western magical tradition. If you go to a church service, where the ritual mode is liturgical, there is no wielding of power; rather the approach is to wait for the power to manifest. 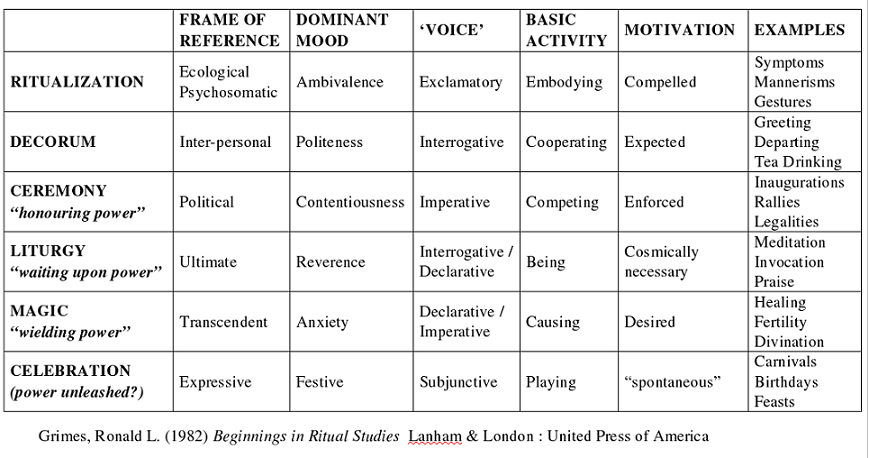 This diagram repays a lot of study and thinking. Most church services are liturgical; most Pagan rituals are magical or celebratory. If you go to a ritual expecting one mode, and it turns out to be in another mode, it can be very jarring, especially if you were expecting a magical or liturgical ritual and it turned out to be celebratory.

Examples of ritualisation include your morning routine (get up, have breakfast, have a shower, brush your teeth, go to work – or some variation on that set of actions); your evening routine (come home, kick off your shoes, maybe change your clothes, have a glass of wine); and so on. They are psychosomatic because you don’t even think about them; they are automatic. They are embodied because they are physical actions.

Examples of decorum include shaking hands, waving goodbye, asking someone how they are. These are polite gestures that smooth your passage through your social milieu.

Ritualisation and decorum are not full-blown rituals; they are mini-rituals. The other categories are performed at greater length.

Typical ceremonies would include the crowning of a new monarch, the inauguration of a new President, the state opening of Parliament, and so on. They honour the power that is vested in the status quo.

Liturgy, which means ‘the work of the people’ is a collective affirmation of what is of ultimate worth, also known as “worship”. If you have issues with the word “worship” because you think it means self-abasement, I highly recommend reading An Abraxan Essay on Worship, available from the CRES website. This essay reclaims the word to mean ‘honouring whatever we regard as being of ultimate worth’, and draws on the theology of Paul Tillich, including the idea of the ground of all being.

Liturgy may involve waiting for power to manifest, but there is a dignity and solemnity in liturgical ritual which can be very enjoyable, and if it is done well, it can bring power through just as much as a magical ritual does. I would like to see more of the liturgical mode in Pagan rituals. I would imagine that Reconstructionists would be well-placed to create liturgical ritual, because ancient polytheism was more about worshipping deities than invoking them for theurgical or magical purposes. I have only attended one Reconstructionist ritual — it was very liturgical in style.

Magical rituals are intended to cause change and transformation, either in the inner states of the participants, or in the external world. These include rites of passage, whose function is to bridge the divide between one psychological state and another (for example, to manage the transition between childhood and adulthood); and healing rituals, whose function is to transform an ill person into a well person. Even seasonal festival celebrations could be said to be magical rituals, because they manage the transition between one seasonal and the next.

Interestingly, when Unitarians switch to magical or symbolic mode, they refer to it as “ritual”. Examples include planting seeds to symbolise renewal, the water communion, and the flower communion.

Celebratory rituals can include birthday parties, but also parties to celebrate seasonal festivals. The aim of such a festivity is not to transform anything or manage a transition, but to let off steam. In the ancient world, carnivals inverted the normal social order and allowed everyone to let off steam, and then they returned to the normal social order when the festivities were over.

When writing rituals, you can deliberately make use of these different modes to create a different mood, depending on the purpose of your ritual. Sometimes a ritual can include more than one of these modes.

3 thoughts on “Ritual, liturgy, and worship”