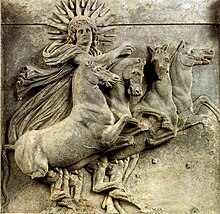 Relief showing Helios, sun god in Greco-Roman mythology. From the temple of Athena in Ilion (Troy). Circa 325 to 390 BCE. Pergamon-Museum, Berlin, Germany. [Public domain, via Wikipedia]

We then go on to ascribe these qualities to actual men and women, or regard them as the “ideal” masculine and feminine qualities.

Of course we know that real Moon goddesses are not dreamy, pretty, airy-fairy, and harmless at all. But that doesn’t stop people from depicting them that way. And that real Sun gods have a sensitive and emotional side. Don’t we?

We tend to associate Summer Solstice with the Sun being at the height of its power, and it is at this time of year that a lot of archetypal material about the Sun god gets wheeled out for presentation at Pagan rituals.

But it doesn’t have to be that way!

Many cultures have a Moon god and a Sun goddess. It’s also possible that these cultures had some different ideas about qualities being associated with one gender or another. It’s worth looking at Sun goddesses and Moon gods, because we can learn a lot about the mythology of the Sun and the Moon, and begin to deconstruct gender stereotypes at the same time as finding out some great stories.

the original Proto-Indo-European lunar deity appears to have been a male god. In subsequent traditions, the number of male moon deities (or words for “moon” with a male gender) seem to vastly outnumber female ones, which appear to be an exclusively eastern Mediterranean invention. Several goddesses, like Hecate or Artemis, did not originally have lunar aspects, and only acquired them late in antiquity, due to syncretism with Selene/Luna, the de facto Greco-Latin lunar deity. In traditions with male gods, there is little evidence of such syncretism, though the Greco-Roman Hermes has been equated with male Egyptian lunar gods like Thoth. In Greece proper, remnants of male moon gods are also seen with Menelaus.

Practitioners of  Dievturība, the revived traditional religion of Latvia, celebrate the Sun goddess, Saulė. Saulė is a goddess with a fairly detailed story and attributes. She is the goddess of life, fertility, warmth, and health, and is patroness of the unfortunate, especially orphans. The Lithuanian and Latvian words for “the world” (pasaulis and pasaule) mean as “[a place] under the Sun”. The summer solstice is the feast of Saulė, and the winter solstice is celebrated as her return.

Amaterasu is the Japanese sun goddess, who is seen as the goddess of the sun and of the universe. The name Amaterasu derived from Amateru meaning “shining in heaven.” Her full name, Amaterasu-ōmikami, means “the great august kami (god) who shines in the heaven”. She hid in a cave after her brother Susa-no-o went on a rampage.

In Ancient Egypt, the earliest deities associated with the sun were all goddesses: Wadjet, Sekhmet, Hathor, Nut, Bast, Bat, and Menhit.  There were also Moon gods, such as Thoth and Khonsu.

According to one of the poems in the Poetic Edda, a figure named Svalinn rides in the sun’s chariot and holds a shield between her and the earth below. If he didn’t do this, both the land and the sea would be consumed in flames. Elsewhere, the father of Sol and Mani is named as “Mundilfari,” about whom we know nothing. His name might mean “The One Who Moves According to Particular Times.”

In runic lore, the gentle warmth of Sol is contrasted with the heat of the rune Sowelu, but it seems as if this might be a misattribution.

When I am writing rituals, I try not to always go for the “obvious”. I like to challenge people’s assumptions, and introduce deities that look a bit different. One year, I wrote a ritual to Saulė. Another summer solstice, I wrote a ritual all about the arrival of Parsifal at the Grail Castle.

If the deity is not very well-known, I find out as much as I can about them, and email all the ritual participants their story beforehand, and/or build in a meditation about that deity.

Whilst the summer solstice is the moment at which the days get shorter, and the Sun starts rising further south again, there is still plenty of summer left after the solstice. Some people regard 21 June as Midsummer, others regard it as the start of summer.

Summer is always associated with warmth and plenty and long lazy sunny days – until you get to the harvest, when it’s all hands to fields to bring in the crop before a summer rainstorm comes and trashes it.

The word solstice literally means “Sun stands still” as the Sun seems to rise at the same point on the horizon for a few days. So the solstice is a moment to pause, and take stock, as well as to enjoy the longest day.