There’s a lovely story in Richard Adams’ folktale anthology The Iron Wolf,  called “The Painting of the Birds”. I was reminded of it because today is National Bird Day.

Here’s my retelling of the story.

The Painting of the Birds

God realised that the birds as originally created were a bit drab, brown, and boring, So he made a big box of magic paint and some beaks, and asked the Angel Gabriel to summon all the birds to be painted.

All the birds came. The roller was painted bright blue and turquoise. The golden oriole was yellow and black. The kingfisher was turquoise and russet. They all strutted around in their beautiful new plumage.

The peacock and the toucan were particularly enthusiastic with the colours. The peacock strutted around showing off his new tail. The blackbird looked at these vain creatures and decided on a sober suit of black with yellow beak and feet. The other birds admired his simple plumage.

The beaks were distributed too. The avocet and the snipe had long beaks for getting worms out of mud. God wondered why he’d made the big pouchy beak at the bottom of the box, but the pelican was delighted when she saw it. Just the thing for storing fish.

The colours were so special that God could only make them once – they would last forever once they were on the birds, but he couldn’t make any more.

At the end of the day, the nightingale came puffing up – she had been hiding in a thicket and had only just heard about the painting of the birds. God looked dubiously at his paintbrush and box of colours. There wasn’t much left.

“Sit on my hand,” he said to the little brown bird. “Now open your mouth.” The nightingale obeyed, and God placed a tiny drop of gold on her tongue – the very last bit of paint he had left. And that is why the nightingale is a dull brown colour, but can sing so beautifully.

One of the reasons I like this story is that it implies that the Creator isn’t omnipotent, as he can only make the special box of paints once, nor omniscient, as it didn’t occur to him to make the birds different colours at the outset, or give them beaks suited to their environment. 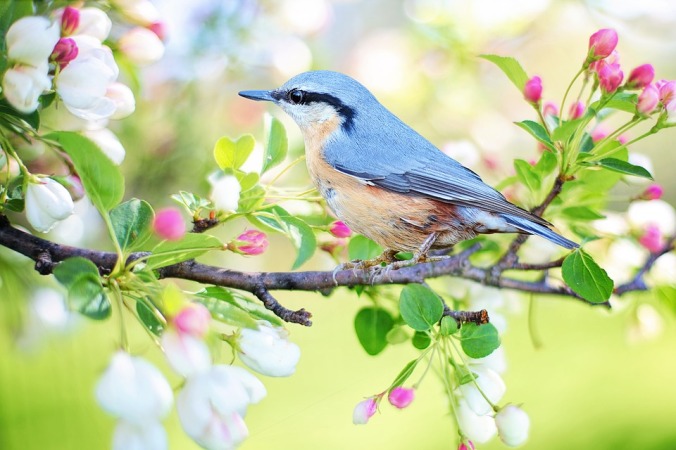 2 thoughts on “Story: The Painting of the Birds”