Since Hollywood and TV don’t seem to have heard of male witches,  I thought it would be fun to make a list of my top ten wizards. There are quite a lot to choose from, what with the Harry Potter universe, the Discworld, and many more. Not all of them are called wizards, but they embody the archetype of wizard, which seems to be derived ultimately from the image of ancient druids and shamans, but has picked up the symbolism associated with magicians, occultists, astrologers, alchemists, and scientists along the way.

Albert’s full name is Alberto Malich, and he appears to be loosely based on the historical wizard Albertus Magnus (philosopher, alchemist, astrologer, and theologian). Albert cheated death by becoming Death’s servant, and has been living in Death’s realm for 2000 years. He was also the founder of the Unseen University. In The Hogfather, he makes one of his occasional appearances in the realm of time, as Death has had to take over from the Hogfather (Discworld’s Father Christmas) and Albert is his assistant “elf”.

It’s the expression on their little faces I like, said the Hogfather.
‘You mean the sort of fear and awe and not knowing whether to laugh or cry or wet their pants?’ [said Albert]
Yes. Now that is what I call belief.

There have been numerous depictions of Merlin in film and fiction, but the one in Excalibur is mystically connected to the land. One of my favourite scenes is the one where he stops his horse to let a beetle cross the road (I think it was in this film, but I am not sure). The only drawback of this particular portrayal is the weird silver hat given to him by the costume department.

I have walked my way since the beginning of time. Sometimes I give, sometimes I take, it is mine to know which and when!

Well, you can’t have a list of wizards without Gandalf in it, can you? And played by Ian McKellen too. Gandalf is one of the Istari, a group of Maiar who came to Middle Earth (as told in The Silmarillion). He is a kindly wizard who enjoys making fireworks and pipe-smoking, but he is gradually revealed as a very great wizard, and the bearer of Narya, the Ring of Fire, the third of the Elven-rings.

Frodo: It’s a pity Bilbo didn’t kill him when he had a chance!
Gandalf: Pity? It was pity that stayed Bilbo’s hand. Many that live deserve death. And some that died deserve life. Can you give it to them Frodo? Do not be too eager to deal out death in judgement. Even the very wise cannot see all ends. My heart tells me that Gollum has some part to play yet, for good or ill, before this is over. The pity of Bilbo may rule the fate of many.

Howl is a powerful wizard whose magic derives from the fire-demon Calcifer, who lives on the hearth in the moving castle. The Studio Ghibli film was adapted from the book by Diana Wynne-Jones. Howl is enigmatic and somewhat ambivalent, and a bit of a Peter Pan character, but that makes him all the more interesting.

Howl: I’d appreciate it if you didn’t torment my friend.

Although never referred to as one, Doctor Who is the archetypal wizard. He can move through time and space, frequently saves the world, and can regenerate into a new body.

“Any sufficiently advanced magic is indistinguishable from technology”
[a paraphrase of Clarke’s Law in Battlefield, 1989] 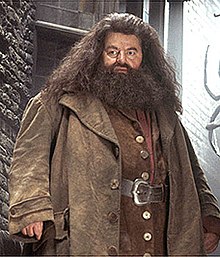 Rubeus Hagrid is half-giant, half-human, and initially has the role of groundskeeper  at Hogwarts because he was expelled as a student for bringing in an acromantula. He is frequently entrusted with secret missions by Albus Dumbledore, but has a weakness for magical creatures of all sorts, whether it’s spiders, dragons, Buckbeak the hippogriff, or Fluffy the three-headed dog. He gets the job of teaching Care of Magical Creatures after his name is cleared. He is also involved in the key events of Harry’s life. There are many wizards in the Harry Potter stories, but I chose Hagrid because he is close to nature and animals.

Not only does Luke redefine “The Force” in this movie, he also redefines what it means to be a Jedi, and his story-arc ends with a heroic act of teleportation and transfiguration. Many people (including Mark Hamill) didn’t like this new version of Luke, but I really liked this character who wants to question all the received assumptions, undermine the concept of individual heroes, and is prepared to be the last Jedi because he believes that the time of the Jedi is at an end, and the Force belongs to everyone.

“Lesson one.  The force is not a power you have.  It’s a tension that binds the universe together.” 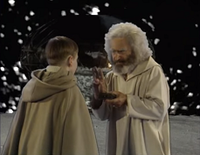 Cole Hawlings (who is actually the medieval philosopher and alleged magician Ramon Llull) entrusts the Box of Delights to Kay Harker, who then experiences a series of adventures including meeting Herne the Hunter, travelling through time, and defeating the evil magician Abner Brown. Cole can travel through time and disappear into pictures. The TV series had some pretty spectacular effects for its time, and also featured “The First Nowell” from the third movement of the Carol Symphony by Victor Hely-Hutchinson.

There have been several film versions of Shakespeare’s The Tempest. Prospero is the archetypal Renaissance magician, controlling spirits and having a collection of magical texts. He conjures up a storm in order to shipwreck his brother, who has usurped Prospero’s rightful place as Duke of Milan.

We are such stuff
As dreams are made on, and our little life
Is rounded with a sleep.

Gwydion is the mentor and protector of Llew Llaw Gyffes in the animated film version of the Mabinogion, and seeks to outwit Arianrhod to give Llew a name, weapons, and a bride, Blodeuwedd. In the stories of the Mabinogion, he is a key character, and a powerful magician. He is also a trickster.

I had a rule while compiling this list that I would include only one wizard per fictional universe; otherwise it might have included Albus Dumbledore, Ron Weasley, Radagast (in spite of what The Hobbit films did to him), Severus Snape (the Sydney Carton of the Harry Potter universe), Mustrum Ridcully, Rincewind, and quite a few others.

Once again I noticed a lack of wizards of colour and LGBT wizards. There are occasionally female wizards, but they don’t tend to make an appearance in films (except the 2010 version of The Tempest with Helen Mirren as “Prospera”).

Who are your favourite movie and TV wizards, and why? Share your thoughts in the comments.