This idea was expanded upon by J Michael Straczynski in Babylon 5, where the character Delenn says:

The Universe itself is conscious in a way we can never truly understand. It is
engaged in a search for meaning, so it breaks itself apart, investing its own
consciousness in every form of life. We are the Universe, trying to figure itself
out.

And who could forget Sagan’s Pale Blue Dot, one of the most inspiring pieces of prose ever written.

A religion, old or new, that stressed the magnificence of the Universe as revealed by modern science might be able to draw forth reserves of reverence and awe hardly tapped by the conventional faiths. Sooner or later, such a religion will emerge.

Sagan wrote many poetic evocations of the universe and these will form the backbone of Saganism’s liturgy:

For as long as there been humans we have searched for our place in the cosmos. Where are we? Who are we? We find that we live on an insignificant planet of a hum-drum star lost in a galaxy tucked away in some forgotten corner of a universe in which there are far more galaxies than people. This perspective is a courageous continuation of our penchant for constructing and testing mental models of the skies; the Sun as a red-hot stone, the stars as a celestial flame, the Galaxy as the backbone of night.

The chief festival of Saganism will be Carl Sagan’s birthday, 9 November, but it will also celebrate the solstices, equinoxes, and other astronomical events. Its theology is mainly agnostic, in keeping with Sagan’s own views, but it will welcome all theological perspectives. We need more open-minded skepticism of the sort that he advocated:

We wish to pursue the truth no matter where it leads — but to find the truth, we need imagination and skepticism both. We will not be afraid to speculate, but we will be careful to distinguish speculation from fact. The cosmos is full beyond measure of elegant truths; of exquisite interrelationships; of the awesome machinery of nature. The surface of the Earth is the shore of the cosmic ocean. On this shore we’ve learned most of what we know. Recently we’ve waded a little way out, maybe ankle deep, and the water seems inviting. Some part of our being knows this is where we came from. We long to return. And we can. Because the cosmos is also within us. We’re made of star-stuff. We are a way for the cosmos to know itself. 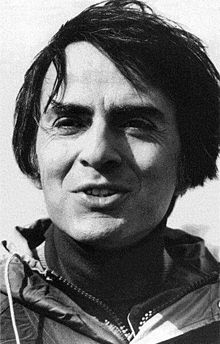