The book is written in a very engaging style. Ms Vowel decided to write it as if she was sitting with you in the pub having a chat about the issues. Every so often it feels like she leaned over the table and grabbed you by the lapels; but the material being dealt with in this book deserves that treatment.

It’s a very thorough examination of, and introduction to, the issues facing Indigenous people in Canada. It deals with education, land, residential schools, government policy and programmes, stereotypes about Indigenous people, racism, assumptions that settlers make about them, and much more besides.

The references in each chapter contain suggestions for further reading, especially the conclusions of RCAP, the Royal Commission on Aboriginal Peoples, which produced a report in 1996. This report concluded that everything done by colonial governments up to that point was wrong. Sadly, governments since then have continued to implement these same wrong policies.

I knew bits of the information contained in this book from having followed the 150 acts of reconciliation programme last year. What the book did was to fill in the gaps, add a lot of detail, and provide an overview of the whole picture.

One of the things I didn’t know about, that illustrates the disastrous and damaging policies pursued by colonial government, is what happened when the prairies were “opened up” for settlement. After the buffalo population had been decimated, Indigenous peoples were given reserves and farming implements. They made a great success of farming (in spite of all the obstacles placed in their way) by farming collectively. This success was then taken away by the government and Indian agents preventing them from farming collectively, forcing them to only have family smallholdings, and preventing them from leaving reserves to sell their produce.

When Indigenous peoples are left to organize things for themselves, and given adequate funds, the outcomes are much more successful. For example, the Mikmaq have been running their own education system for a while now, and have an 88% school graduation rate (higher than the rest of Canada).

This book gives detailed evidence of how Indigenous peoples have been set up to fail by previous attempts to organize their lives, and debunks the damaging stereotypes that get bandied about. It’s vital reading.

You can order the book from amazon.ca (I tried to order it from England and found that I couldn’t). 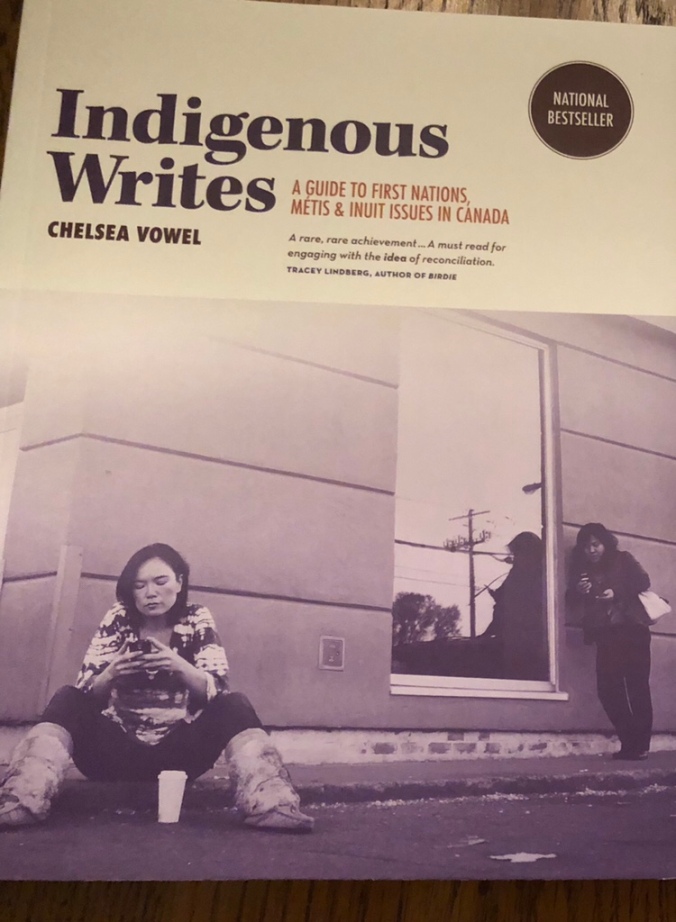 2 thoughts on “Review of “Indigenous Writes” by Chelsea Vowel”