I’ve now surpassed my rather modest goal of reading 30 books this year. I used to read a lot more books when I was travelling to work on the bus.

This month I’ve re-read Empire of Bones by Liz Williams, and read Pagan Magic of the Northern Tradition by Nigel Pennick, The Wake by Paul Kingsnorth, and started The Book of English Magic by Philip Carr-Gomm and Richard Heygate.

Empire of Bones by Liz Williams

I think this is about the third or fourth time I’ve read this book. It’s so original and different from other SF. For a start, the main character is based on Phoolan Devi (I asked Liz if that was the case and she said yes). The aliens turn up in India instead of the USA. And they live in houses that are large plants of some kind, and communicate pheromonally as well as verbally. If you read the blurb for this book on websites, it implies that the aliens are also Hindu deities, but that question is left tastefully ambivalent. Once again I found myself impressed by the characterization and plot and writing. Highly recommended.

The Wake by Paul Kingsnorth

While I was in the UK recently, I went into Blackwell’s bookshop in Oxford and did that annoying thing: I said, I’m looking for a book, can’t remember the title or the author, it’s green and it’s written in quasi-Middle English. The first member of staff I asked had no idea but he took me to another man at the front, who immediately dived across the shop and retrieved the book from the shelf. There aren’t that many books written in quasi Middle English but that is pretty impressive.

The book itself is a tale of a man living at the time of the Norman Conquest. He is a man with a house and a wife and two sons and two geburs (something like indentured servants). He sees a bird of ill omen and then the hairy star (Halley’s comet). His two sons go to fight Harald Hardrada at Stamford Bridge, and then to Hastings.

The protagonist is a Heathen and has a personal relationship with Wayland the Smith. He becomes a resister against Norman rule. 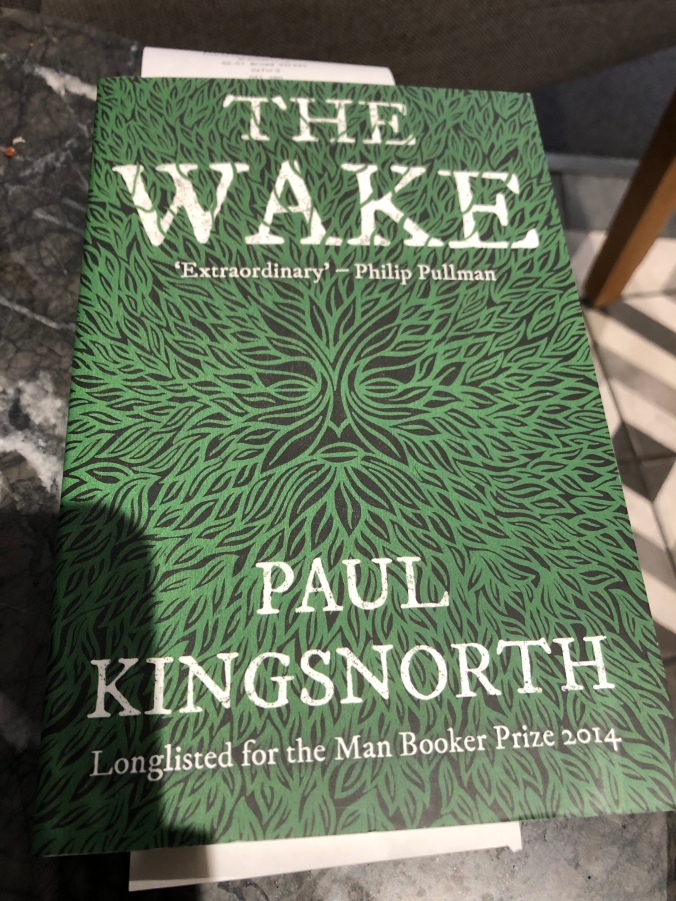 The really amazing thing about this book is the language. If you want to immerse yourself in the world of the 11th century, this is the nearest you’ll get. It has a unity of style that could only exist by using only Anglo-Saxon words. I would strongly recommend reading the afterword and the glossary before you start reading the book. Reading it out loud, or sounding it in your head, also helps when a word seems unfamiliar.

Pagan Magic of the Northern Tradition: Customs, Rites, and Ceremonies, by Nigel Pennick

Excellent study of traditional magical customs and practices, including the cosmology, ritual year, protective magic, and folklore of the Anglo-Saxon, Norse, and Germanic world.

Written in an engaging and accessible style, and thematically organized, this is an essential book for anyone who wants to understand the traditional worldview of Northern Europe. It’s also guaranteed free from any white supremacist nastiness, as Nigel Pennick has worked to uncover the real traditions and expose the Nazi versions of them as lies and distortions.

It’s a very different book from his other one with a similar title, Practical Magic of the Northern Tradition, which is also excellent.

The Book of English Magic, by Philip Carr-Gomm and Richard Heygate

There’s lots to like about this book. It has contributions from several contemporary English magicians, Druids, and authors on magic. It has lots of fascinating information and lists of suggestions for further research. It is well organized and researched. I also think the sections on traps for the unwary are quite helpful.

The style is a bit annoying (especially the sections where the reader is asked to imagine they are in the historical period being discussed; personally I do that anyway without being prompted).

As a popular work, it’s a useful introduction to the history of magic in England.

I just started reading Yiddish for Pirates by Gary Barwin which is informed by Jewish Pirates of the Caribbean which I read in January.

I’m still reading Insurgent Empire by Priyamvada Gopal. It’s not really bedtime reading to be honest, as it’s a hardback and difficult to prop it up on the pillow.

I’ve also started The Good, the Bad, and the Furry by Tom Cox. It’s lovely. A mix of cats, landscape, and Tom’s amazing family.

One thought on “Books I’ve read in September”