On being trans in Middle Earth

After the wedding of Faramir and Éowyn, when they had cleansed Ithilien of its hurts, and the land was fair and green once more, Éowyn and Faramir went to the hidden cave behind the waterfall which Faramir had used in the War of the Ring.

And Éowyn bethought her of the time when she had ridden as Dernhelm, and slain the lord of the Nazgûl.

“Chainmail I wore then, and armour, and britches,” she said to Faramir as they lay in bed, watching the green light filtering through the new beech leaves and listening to the plashing of the waterfall outside.

“And a most valiant Rider of Rohan you were,” said Faramir. “And slew the Witch King of Angmar to boot.”

“I was thinking…” began Éowyn.

“That you could wear britches again?” asked Faramir. “Just the thing for riding. And gardening too for that matter.”

“I think it would be most excellent,” said Faramir. “And even if I did mind, I wouldn’t stand in your way if you truly desired this thing. I think I’ve still got some spare green ones in the quartermaster’s store here, if you want to try them.”

He kissed Éowyn and leapt out of bed. She heard his footsteps echoing through the cave as he went to find the chest where the hidden patrol of the marches of Ithilien had stored their equipment and clothing. He returned with a serviceable pair of green trews.

“Here you are, my love.” He smiled and held out the trews for Éowyn.

She swung her legs out of bed and put on the britches.

“A perfect fit,” said Faramir. “I don’t know if it’ll catch on in Gondor, but I think it looks very fetching.”

They breakfasted in the chamber behind the waterfall, now furnished with an elegant Elvish dining table and chairs; a wedding gift from Arwen and Aragorn, who also loved to retreat from the cares of state in the hidden cave.

“There’s a rumour of an Entwife sighting,” said Faramir, as he buttered his third piece of lembas.

“Really? I thought they all disappeared at the sundering of the lands,” said Éowyn. “I wonder if the Entwives would’ve liked Ithilien?”

“It is said they liked orchards and gardens, while the Ents preferred the wild woods,” said Faramir. 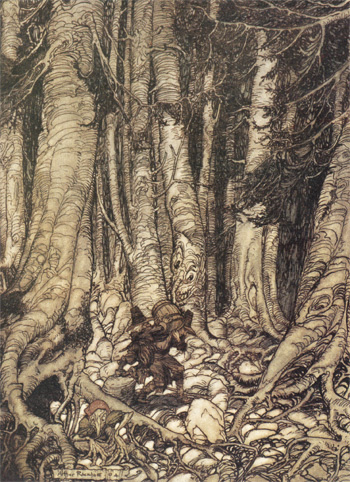 Far away, in the great expanse of woodland called Fangorn, an Entmoot was in full swing.

Treebeard gazed kindly at a slender Ent, one of the younger of their kind. “Hoom hom,” he boomed. “So you want to be an Entwife?”

“No, I am an Entwife,” replied the other. “It all started when I went to gaze upon the orchards of Rohan. The apple trees spoke to me…”

“Hush, this is interesting,” said Quickbeam.

“Hoom, haroom, do continue, Holly,” said Treebeard, gazing at Beechcroft with what he hoped was a hard stare.

“The apple trees, and the pear trees, and the cobnut and filbert and hazel trees,” said Holly. “They were so lovely that I was moved to produce blossom.”

Quickbeam approached Holly. “Why yes, that does appear to be a female branch you have there, old chap… er… chappess.”

“This can only be a good thing,” said Treebeard. “It is many a long year since we saw the Entwives, and even longer since there were Entings playing about my feet. Puts me in mind of the Halflings, it does.”

Some of the younger Ents shuffled their feet and rustled their leaves. Entmoots lasted twice as long when Treebeard got to reminiscing about Meriadoc Brandybuck and Peregrine Took, and the siege and destruction of the tower of Orthanc.

“Well then,” said Quickbeam, “I vote that we give three cheers for Holly.”

Beechcroft muttered something inaudible into the grass at his feet.

“If you are going to talk to the turf and not to the moot, Beechcroft, I shall have to rule your points inadmissible,” boomed Treebeard.

“Oh — it was nothing,” said Beechcroft.

“Very well then, I second Quickbeam’s motion. All in favour say Hoom.”

A chorus of “Hoom! Hoom! Hoom!” echoed through the grove where the Entmoot had gathered. 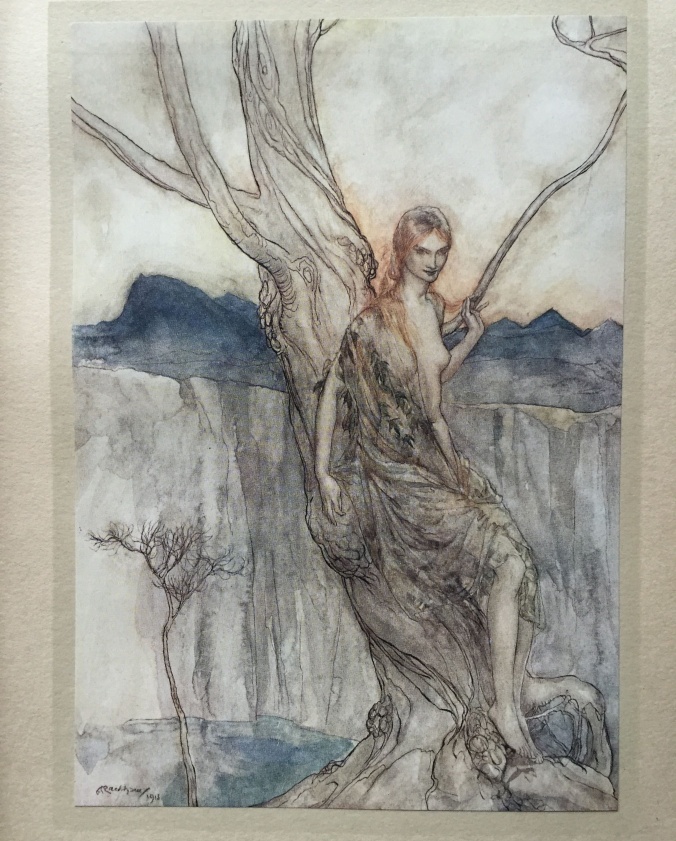 When Éowyn and Faramir returned to Minas Ithilien, they found it much transformed. Artists and artisans had beautified it with mithril and mother of pearl and nacreous paint, so that there was no hint that it had ever been the dread Minas Morgúl.

And a visitor awaited them in the courts of the tower: Meriadoc Brandybuck had journeyed all the way from the Shire to visit his old friend Éowyn.

“Well if it isn’t my old friend Dernhelm!” laughed Merry.

“Well you’ll be glad to hear that Sam has planted a large number of mallorn trees around the Shire, then,” said Merry.

“And I don’t doubt that you’ve been cultivating the finest seeds of Old Toby’s pipeweed,” laughed Faramir.

“Well, and I note that you’re partial to it yourselves,” said Merry, “so I brought you some of last year’s vintage.”

“Excellent,” said Éowyn. “Well, come on in, Merry, and let’s see what’s for dinner. “Faramir and I have turned vegetarian, so I hope you don’t mind nut cutlet.”

“Not at all, as long as it’s washed down with the fine ale of Ithilien,” said Merry.

After dinner, Éowyn, Faramir, and Merry sat out on the terrace overlooking the gardens of Minas Ithilien.

“You’ve worked wonders here, you really have,” said Merry. “You wouldn’t know this had orcs trampling all over it less than a decade ago.”

“The land is recovering from the vile durance of Sauron and Saruman,” said Faramir. “I think that when the Elves travelled this way towards the Grey Havens, they blessed the land as they passed through.”

“Ah, the Elves. Lovely folk,” sighed Merry. “What I wouldn’t give to set foot in Lothlórien once again.”

“A place of absence now that Galadriel and Celeborn have gone to Valinor,” said Éowyn.

“But the mallorn trees are still there, and the flets. And the land never truly forgets the Elves,” said Merry.

“Only in dreams may we meet with them now,” said Faramir.

They all pulled slowly on the elegant pipes that Merry had brought from the Shire. Faramir sent smoke rings across the garden in honour of his friend and mentor Gandalf.

The next day, as they broke their fast in the great hall, a rider came from Gondor, seeking audience.

“My name is Piilotettu Kypärä. I fought in the ranks at the Battle of Gondor, but my true nature is female. When I was born, they said I was a boy, but I have always known myself to be a girl and then a woman. The lads in the city didn’t take it too well, so I hightailed it out of there.”

“All are welcome in Ithilien,” said Faramir. “My lady Éowyn was a great warrior and is now a mighty gardener and a healer of renown. This is the place for new roles, new ways of thinking, new ways of being.”

“Be welcome to our house, Kypärä,” said Éowyn. “This is the sacred fane of the Moon. All things here are governed by her silvery light, and hence may change with her tides.”

Merry took a pull on his pipe. “My cousin Peri always said he was a girl. Now they’re genderfluid. Don’t see a problem with it. They like knitting and embroidery.”

“You came to the right place for that. We have the best wool in the whole of Gondor and Arnor put together,” said Faramir. “You shall be weaver to the court of Ithilien, if that suits you well.”

“It would be an honour,” said Kypärä, with a curtsey. 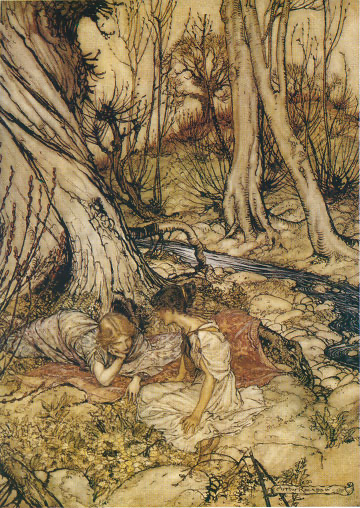 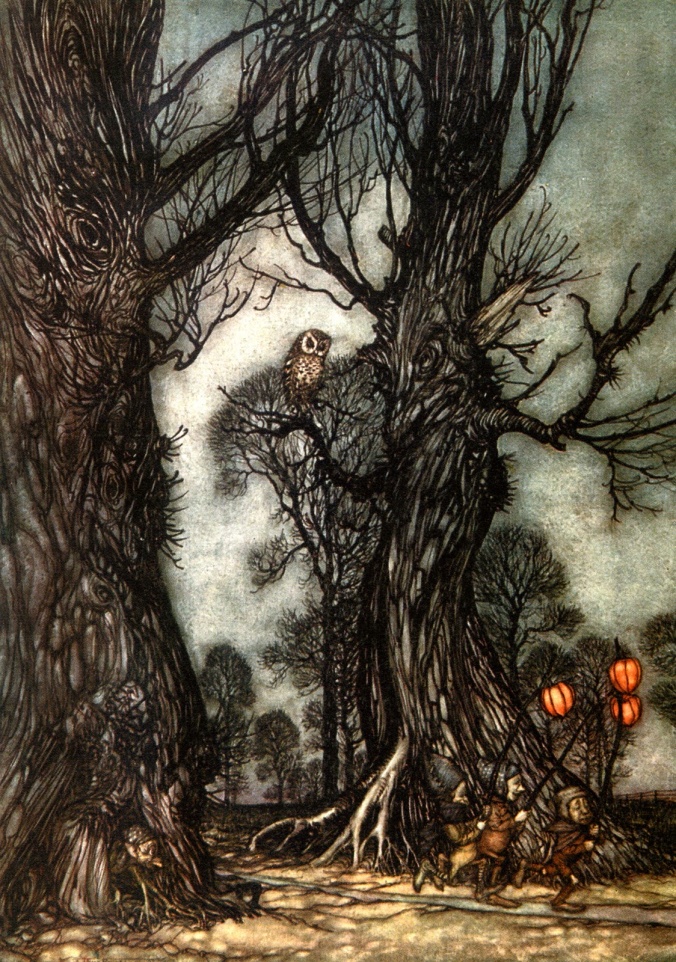 Holly the Entwife strode purposefully down the old Arnorian road, now restored by the commission of King Elessar (Aragorn’s regnal name). She had decided to go to Ithilien, where the orchards were plentiful. Quickbeam stomped along beside her.

As they forded the River Anduin and entered South Ithilien, a rainbow shone in the sky.

“It’s a good day to be an Ent,” said Quickbeam.

They covered many leagues in a day on their long legs, and soon arrived at Minas Ithilien.

“Quickbeam!” exclaimed Merry. “How wonderful to see you! How’s Treebeard?”

“He’s well, thank you. And this is Holly,” said Quickbeam.

“Are you — are you an an Entwife?” asked Merry.

“We’ve been expecting you,” said Éowyn. 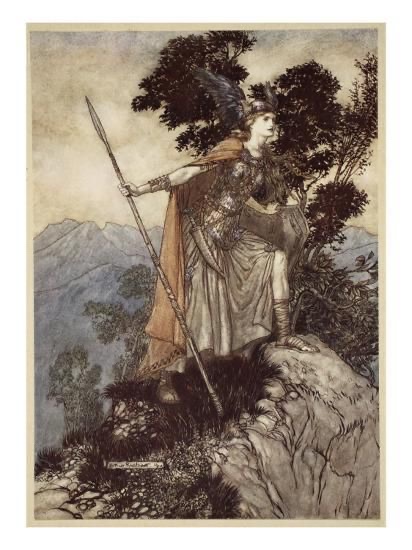 Inspired by a tweet by @sistersinead and my reply

"I am no man!" I shout as I destroy the Nazgûl. after the war I'm exiled from Gondor for using the wrong toilet

But Eowyn and Faramir welcomed you to Ithilien because Eowyn found it more convenient to dress as Dernhelm most of the time and so Ithilien was trans inclusive.

Hmm this could make some great fan fiction 🌈🌿

15 thoughts on “Ithilien after the war”