Theatres are sacred. They were first formalized in Ancient Greece, but doubtless sacred drama is as old as ritual. It’s from the ancient polytheistic Greeks that we have written dramas, comedy, tragedy, and theatrical concepts like the chorus, catharsis and the deus ex machina.

So the loss of places to perform live theatre should be of concern to Pagans. It’s just come to my attention that the theatre in the city where I grew up is closing because of the pandemic. And there’s a petition to save it.

I was a volunteer usher at the Nuffield Theatre in the 1980s. I went with my Best Gay Friend. It’s where he came out to me, in the interval of one of the plays for which we ushered. We got to see the play for free in return for ushering.

Some of those plays rocked my world and made me see things differently.

I still have most of the play programmes. Here they are — marvels of 1980s design — amazing what you could do with three-colour printing. 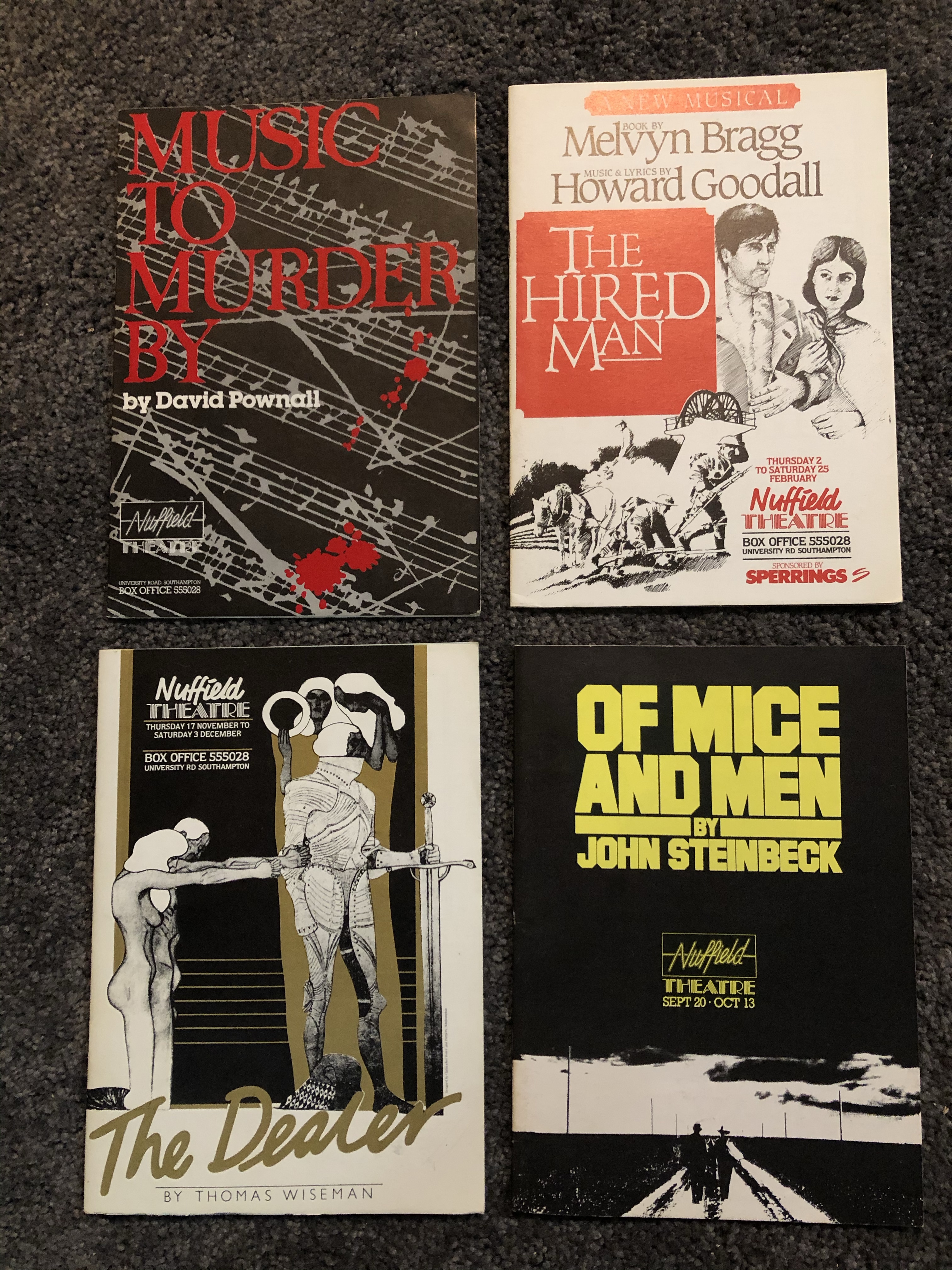 Sadly I don’t seem to have one for the stage version of The Rocky Horror Show that I saw there; or for the premiere of Daisy Pulls It Off, which I think ended up on Broadway.

The Hired Man, by Melvyn Bragg, was a musical about agricultural labour in the 19th century. Proper left wing stuff.

The Dealer was about a guy who rescued Jewish people from the Nazis by trading them for art.

Music to Murder By was about Peter Warlock and the Renaissance composer Gesualdo. It’s where I learnt about both of them.

There was also an amazing play about Mikhail Bakunin, the 19th century Russian anarchist. It was my first exposure to Bakunin.

My friend and I stopped ushering there when the manager changed, and the amazing person who encouraged all these wonderful plays was replaced by a commercially-minded man who wanted volunteer ushers to wear a white blouse and black trousers or skirt, and worse than that, commissioned much more commercial plays which were not nearly as interesting. Dude, you don’t get to tell volunteers what to wear. And theatre is meant to be challenging.

Anyway, I have many happy memories of the wonderful run of plays while these lovely people were in charge.

Near the Nuffield Theatre is the amazing Turner Sims Concert Hall. I don’t know if that is also under threat; I hope not. I heard some wonderful concerts there: the amazing Trevor Pinnock (before he was famous); my first sight of medieval and Renaissance instruments, including the serpent; and a fabulous harpsichord piece by Ligety that makes the harpsichord reverberate.

And in the same area, there’s a small but amazing art gallery.

Please help save it by signing and sharing the petition. Because theatre is sacred, especially live theatre.

2 thoughts on “Theatres are sacred”