One of my favourite folk rituals is the practice of wassailing. This is done in apple-growing districts to wake up the apple trees and encourage them to produce plenty of fruit in the autumn. I love it so much that I planted an apple tree in my garden so I could wassail it.

There are many wassailing songs and customs. In apple-growing districts, they celebrate the Apple Wassail. Some districts put toast in the branches of the apple tree for the robins. Some share mulled cider and pour it on the roots of the tree. Some beat pots and pans and fire guns through the branches to wake up the trees.

In districts where there are no orchards, they carry the wassail bowl from house to house, and this is known as the visiting wassail. In South Wales, the custom includes the Mari Lwyd. 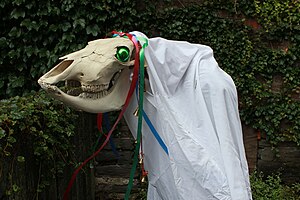 The name wassail comes from the Anglo-Saxon “Waes hael” meaning “Be whole/well/hallowed/healthy”. The traditional reply is “Drinc hael“.

The wassail cup was often made from maple wood, which does not impart any flavour to the drink. The drink in it was frequently mulled cider or mulled wine. If it includes apple stewed until it goes cloudy, it’s known as lamb’s wool.

The wassail ritual is very simple, and consists of beating pots and pans to wake up the tree, singing a wassail song, and sharing mulled cider; not forgetting to pour a little near the roots of the tree, or to put toast in the branches for the robins.

My favourite wassailing song is The Gower Wassail.

We often say one of the traditional apple wassail rhymes:

I have been doing a wassailing ritual for over twenty years now. It’s slightly different every year, but in recent years, I have gone for the simplest version of the ritual, because often, less is more.

Last year, as wassailing is usually celebrated on 17 January, the same day as Plough Monday, we also blessed our garden tools.