Imbolc is the time of year when I like to start new projects and endeavours. Imbolc would be an excellent time to celebrate a transition from one gender to another. It’s the time when the first signs of spring appear (at least in my neck of the woods – your local climate may vary). The goddess most closely associated with Imbolc is Brighid, goddess of smithcraft, poetry, and healing.

Some people wait until the first snowdrops appear before they celebrate Imbolc. Snowdrops are the first flowers to appear after the long cold winter. Hence they, and the festival, represent the first stirrings of new life after the darkness, cold, and sleep of the winter.

Snowdrops in the snow. Photo by Sunflair. [Public Domain, CC0]

In 2007 and 2008, I participated in the annual Imbolc poetry slam in honour of the goddess Brighid, with these Imbolc haikus. The poetry slam started in 2005, has been happening every year since then, and happened on Facebook in 2016 and 2017.

The derivation of the word Imbolc is not clear. The most common etymology is that is comes from the Old Irish i mbolc, (“in the belly”), and refers to pregnant ewes. It may be derived from Old Irish imb-fholc, “to wash or cleanse oneself”. This would be consistent with the Latin meaning of February, the month of cleansing. 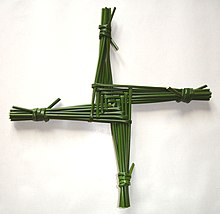 Traditional Irish folk ritual for Imbolc involves making a Brídeóg (a figure or doll of Brighid) and a bed for the doll. People also weave Brighid’s crosses, which were often hung over doors and windows in houses and stables to welcome Brighid and protect the buildings from fire and lightning. The crosses were generally left up until the next Imbolc.
Imbolc is the start of the cleansing tide (one of the four tides of the year), when the mulch and compost from last year’s growth is broken down to feed the new vegetation.
Two more symbols of Brighid are the white swan and the serpent. She is the goddess of the sacred flame of Kildare and the patron goddess of the Druids. The Dagda of the Tuatha Dé Danann is her father.

At this time, sheep are giving birth to lambs, and the trees start putting forth new growth, whose twigs are often red.

In England, Brigantia (who may be the same goddess as Brighid) is the goddess of sovereignty and the land, so this could be a good time to celebrate regaining one’s personal sovereignty or autonomy.