There are currently three amazing exhibitions on at the Art Gallery of Guelph (until 16 December): epistemologies of the moon, 1745, and Critical Mass. It is hard to say which of these exhibitions I was the most excited about, as they all address things I care about. 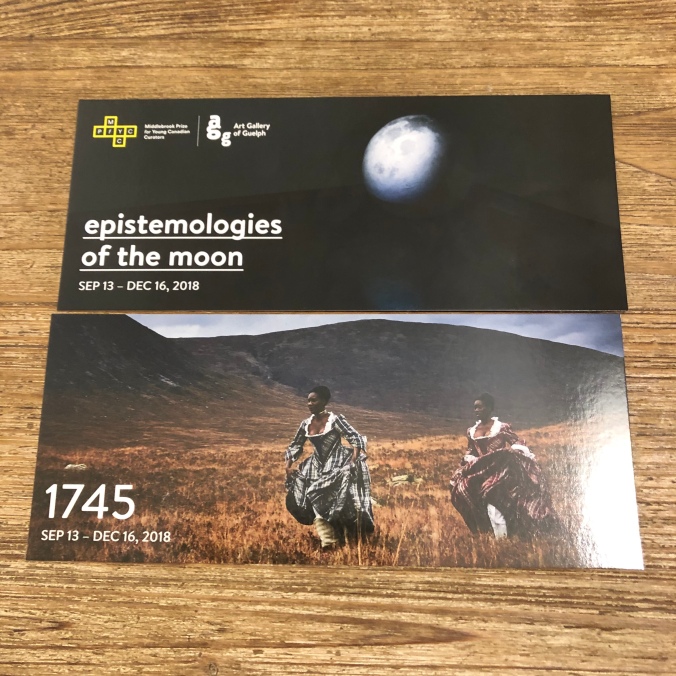 The first exhibition you see as you enter the Gallery is Critical Mass, which examines the experience of being Black in Canada, from 18th century Black Loyalists, enslaved Black people in Canada (prior to slavery becoming illegal), through to their descendants and other contemporary Black communities in Canada.

Despite the long history of Black people in Canada, many people erase their existence and experiences, and forget that they’ve been here for the same amount of time as white settlers, and often arrived fleeing injustice and slavery.

Various different artworks address this history through various lenses and art styles. The one I found hardest to look at was the one with all the crosses in it (not my favourite symbol). Many of the art works were hard-hitting, addressing the existence of slavery in Canada, which often gets brushed under the carpet in favour of the Underground Railroad. One of the most powerful was a needle-felted piece about eight feet high, depicting a slave ship layout – an image that has become so familiar that it was powerful to see it rendered in a different medium.

There were also vibrant paintings of Bantu hairstyles, large pencil drawings of Black people, and a series of photos that I can only describe as Black steampunk. One particularly intriguing piece was a photo of a Black woman mounted on a very reflective surface. Initially I tried to see it whole without my reflection in it. Then I realized that being reflected in it was kind of the point (the title of the piece was about the other of the other), so I lined up my face with hers and saw myself in her face, literally. There was also a book in which you could write your response to a poem. And a Black-only space with a sign outside saying “please do not enter this space if you are not Black”. That evokes some interesting ideas and emotions.

epistemologies of the moon

I was very happy to see a feminist post-colonialist exhibition about the moon that included two-spirit and transgender people. It was great to see two beautiful self portraits by Chief Lady Bird, who I’m following on Twitter, about her relationship with the Moon, and inspired by Indigenous beadwork.

Awarded the 6th annual Middlebrook Prize for Young Canadian Curators, Lauren Fournier’s exhibition epistemologies of the moon engages with the symbolism and imagery of the moon as a historically feminine and, more recently, feminist symbol, opening it up to new meanings and valences in the transnational 21st century. The exhibition emerges from Fournier’s curatorial research around land and place, exploring the dynamics of settler-colonialism and decolonization through mythology, mysticism, ritual, and spirituality.

We also liked the moon phase sculptures with different crystals and substances in the crescents. I felt an overwhelming urge to touch it (but refrained from doing so, because Art).

I was very inspired by the book of spells by Yerba Mala, a transgender and PoC-friendly witch collective. I just followed them on Instagram and Twitter – check them out; they rock. And I want to know why all the friends who were already following them didn’t tell me about them!

This exhibition was mainly a film about two sisters escaping from slavery in the Scottish Highlands, very well made and painful to watch. Painful to think about the lost histories and pain of the many enslaved people, many of whom are only known to history through advertisements for their recapture after they escaped. Like Canada, Scotland prefers to dwell on its history of opposing slavery, rather than its involvement in this shameful history. Yet despite the population of Scotland in the period being only 10% of the population of Britain, 33% of plantation owners and slave traders were Scottish.

All in all, a very powerful collection of art. If you’re anywhere near Guelph, do try to get there before the exhibitions end.